You know when Rania sends a message organizing a Sunday lunch, that you should cancel everything and join. It will be, for sure, a memorable experience! So when she organized this Sunday lunch, I hopped on the bus and was the first to get to the restaurant.
The place: a Xi'an noodle house in Bloomsberry. The Chef: Wei  Guirong, hand-pulled Biang Biang noodle master.
We were eight, sitting at the table non-apologetic about ordering almost the whole menu and ... please two of each! We were hungry!

From the first bite in the hand-shredded chicken with spicy sauce, we know we just discovered a gem! Lucky me, my school is close by! The cucumber salad was very refreshing, but then we were still at our could appetizers. When the spicy wonton soup arrived as the first of our hot dishes, you can definitely hear pleasure sounds coming from our table. The steamed dumplings did not disappoint, but I couldn't say the same about their cumin minced beef in flatbread. As Rania noted, it had no purpose in life! 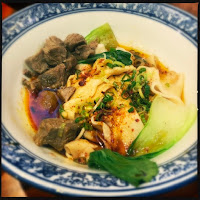 And then the piece de resistance was handed over: Biang Biang beef noodles! It was to die for! I was even ready to throw my misophonia out of the window and start slurping. For those who don't know misophonia, it is an anomaly in which the sufferer hates the sound of eating, chewing slurping, and heavy breathing! For those who know me, they know I am on up there on the misophonia scale!
It is a dish that brings out emotions. It sends you on the brink of sentimentality. It gives you a hug, and you want to hug it back, one of those big bear hugs! The noodles are flat, hand-pulled, and come in different varieties. We choose the beef one. It came with chunks of beef cubbed spiced beautifully I could pick out the star anise and Chinese five spices, it came with Chinese green I don't know if it were baby Bok Choy or the other one and spicy oil.

By the time we were done, we had needed help rolling off the table. We left the restaurant with a smile as big as any happy kid in a candy