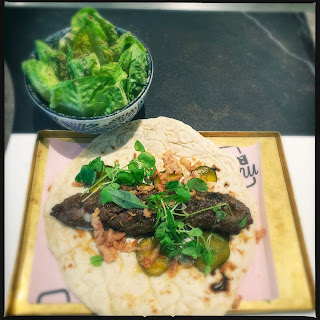 There is something about Turkish Kebab that we the Lebanese couldn’t master. I have a feeling it’s the amount of fat to meat. Theirs are juicier, smoother and packed with flavor. I first thought they don’t put onion in the mix but after inquiring they actually do.  It should be the pasture I believe.
Walking in Covent Garden looking for Queen Bab, I stumbled upon Maison Bab. they are siblings. well, actually you can't go into Queen Bab without passing by Maison Bab. They are both from the Kebab family however one is posher than the other. I just couldn't get myself to go posh Kebab so I opted for a bar seat with a view over the grill or mangal in Turkish.

I ordered an Adana Kebab with a side of green salad and patted myself on the back for my healthy choice.

The meat is tenderly cooked to perfection. Had a spicy kick at the end of the bite due to the Esot Biber they used in the mix. I was expecting more a torsu cucumber (Turkish pickles)  rather than a sweet dill Gerkin like a pickle. The salad with the tahini dressing and a sprinkle of sumac came in hand nicely. I used it as a substitute for the naan that came with the kebab and tried to avoid the smear of yogurt on the bread. I couldn't help but wonder, why would they serve the kebab on a naan bread rather than lavash?

But i have to admit it was one of the best I had in London and that is coming from a Levantian who lived in Istanbul.
Labels: Covent Garden Eating my way around London Kebab London Maison Bab Turkish Food