Eating My Way Around London : Kiln 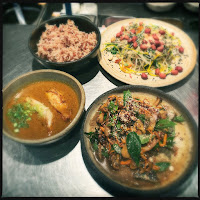 You would think that it’s easier to get a seat on the counter if you were on your own, but that option won’t work at Kiln. I walked in and asked for a seat for one and I still had to wait. The good side is I didn’t get the" leave your number and will call you "but just waited on the side for 15 minutes to get my seat .
I arrived hot but not sweaty, I don’t know who told TfL to turn the heaters on bus number 9 but that hot air was definetly neither an AC not ventilation... It was a sauna.

So I ordered a hibiscus ice tea to cool me down. It’s brewed in house with added sugar to it. I don’t know where I stand from hibiscus but I seem to enjoy that flowery powdery after taste... and the cooling effect is just a great added value.. no wonder it is an Egyptian national drink!

the waitress gave me the menu and I wanted to order half of it.. with the tiny stomach that I have (surgically tiny) I couldn't do that. Gone were those days where I could eat the whole menu! I wanted to order the glass noodles cooked in the clay pot and wanted the Burmese beef curry. so while I was waiting and looking at all the action that was happening behind the counter, I chatted with the waitress as to what to order. the way she explained the intricacies of the other dishes on the menu i thought to drop it off and order other stuff.

Kiln is known for sourcing British local produce and creating a menu influenced by the diverse region of Northern Thailand that borders with Burma, Laos and Yunnan. I think influenced is the operative word here, so no authentic food snob could be offended.  the dishes change according to the availability of the ingredients,

After my wait I got a seat with a view ! I was lucky enough to get a seat in front of the roaring charcoal fired kitchen. this kitchen is run on charcoal only, no gas no electricity (damn sounds a bit like back home). the left side was the grill where they cooked the lamb skewers, the sausages and the chicken, the middle is were a number of clay pot are snuggled on a bed of embers cooking slowly all the lovely flavor (I had tried it before, that is why I was more keen on trying new things), it is also where the vegetable dishes and salads are made, and on the right side of the "kitchen" the curries are cooked.
just following the chefs cooking up those meals, gave me a bit of motion sickness (in a good way) , they are execute their dishes as if choreographed by the Bolshoi Ballet! fascinating, how one move is followed by the second and 1, and 2 and 3... bam the dish is ready!

so after deliberation my order was as follows: the mushroom salad with fermented fish, the northern style turning, radish and herb salad, the fried curry of monkfish and a side of brown jasmine rice. 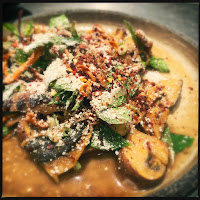 A mix of mushrooms cooked over an open fire then seasoned with a pilara dressing made of river fish, shallots and added mint leaves for a breeze or summer .. there was a few sprinkles of dried chilli but they were taken over by the dressing and another sprinkle of rice powder to give it a crunch. the salad had a meaty , rich and complex flavour . 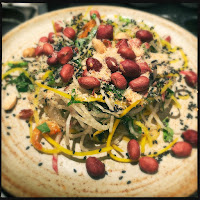 since I knew that Kiln pack their dishes with spice.. eye watering kind of kicks. I order the turnip, radish and herb to cool down the curry. well expecting the curry is less spicy than the salad, I was happily (I used the word because it sounded nice to come before) surprised. the waitress advised me to order it with my rich curry but forgot to mention that I would be ambushed with tiny slices of birds eye chilli hiding in between the spirulized turnips and reddish and give you a massive kick of spiciness!! the dried shrimps and the toasted peanuts gave the salad the saltines and an extra dose of crunchiness. 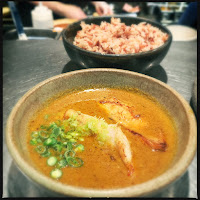 Although the chef told me that the curry of Monkfish builds up its spiciness, it turned out I  was actually cooling down the spiciness of the salad with the fish curry! It was cooler that for sure even though at one bite or another I got the surge of hot and spicy flavour that I was crying,  but there was in between a spoon full of kick in the gut chilli. only the he nutty jasmine rice could balance out the chilli found there. The brown jasmine rice was a great side dish to the curry  since what broth doesn't cling to the fish, the rice grains will soak them up.

this is my kind fo place, the spiciness, the freshness of ingredients, nothing is overly manipulated to the extent of unrecognisable, and I don't remember there were any desserts! well if there was I wouldn't bother, I don't want anything to take away the taste of their curry!