Eating My Way Around London: Sabor 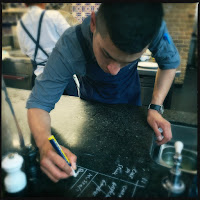 It’s not my first time at Sabor. The last time I went I wanted to write about it but was too busy talking to my friend that I forgot to really focus on every bite I took. So I decided to head back to Heddon street a passage off regent street on my own, chat with the staff and have my lunch. Since the Chef Nieves Barragan Mahacho used to be heading the kitchen at Barrafina,  you would think that Sabor is just another Barrafina (which by the way might be one of the few places that I stand queuing without huffing and puffing) but the place brings a whole new perspective on tapas. Nieves for sure as the French say Elle s’est faite un prénom!
The place is divided into two section, the counter where they serve their tapas menu and is lively and happy. The staff is so friendly, they will answer any question you have and I had many! The upstairs asador Spanish for grill is more of a seated place that I haven’t tried yet but it’s on my list. I was told it serves more traditional cuisine served on a communal table.
I sat at the counter  and ordered my food .. the specialty of the day were a sole, carabeneries , sweet melon salad which I had the last time and it was a great choice during the heat wave and a monkfish tempura that was no longer available.

I could have ordered a croquetta and a tortilla but I wanted something a bit more layered in flavor and that would take my palette a level up or two or three. 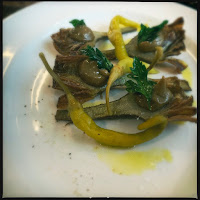 I started with a vegetable dish from the bar menu : Artichokes with pickled chili. It was a deep fried baby artichoke served with pickled chili and a black garlic aioli. For someone who doesn’t eat garlic that aioli was something worth trying . There is no hint of garlic but had the texture of a great freshly made mayonnaise with a bit of earthy smoking flavor. (no offense to the Aioli but just an textural analogy with something more widely familiar) I like to build up my bite. So I took a piece of artichoke, slathered it with aïoli and added a piece of the pickled chili. The saltiness of the brine from the chili once it is in your mout brings out all this amalgam of tastes. 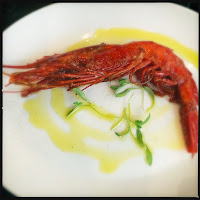 Next came the Carabeneries : I love this crustaceans their Burgandy color just calls my name .. they are meatier than shrimp and has an under tone of smokiness when grilled a la plancha. You might think it is just another shrimp to be eaten  but it’s not . It’s juicier than any other crustacean and all the juices and flavors are in the head. So don’t be a coward, eat it as it’s supposed to be eat and just grab it and just suck on it. 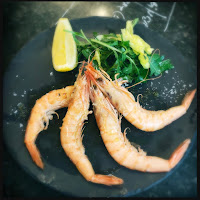 My second dish was followed with the  Gambas coming from Huelva à port city in south west Spain. They are smallish but they were cooked to perfection a la plancha with a sprinkle of salt that I didn’t feel like I needed to drizzle some lemon juice on it. There sweetness makes you want to order them as a dessert. 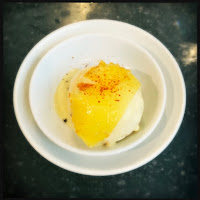 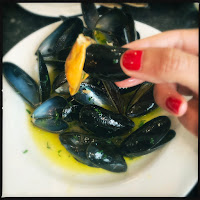 To finish off my pescatarian meal, I ordered deep water mussels : they aren’t the biggest mussels I have had but they are definitely one of the most charnu , fleshy or plump. Cooked simply on the plancha with a drizzle of olive oil and sherry vinaigre and waited to open one by one, i really enjoyed picking the meat and nibbling on them. I like mussels so much that I can sit there and just eat loads of it, but this time I had the option of either finishing the plate and just eat half of it or  get the pineapple and chili sorbet. But since I wanted to take as much flavor as possible I opted for the sorbet.... ok to be honest I ate more than half the plate.

I ended the meal with the Pineapple and chilli sorbet. It was a scoop of pineapple sorbet on a bed of crumbled chocolate cookie and wrapped with a grilled slice of pineapple and a sprinkle of chilli. I thought the chilli would be more prominent and might give me a kick in the taste buds  but i barely sensed it. However the sorbet was a nice fresh summer breath to cleanse the pallets after a lovely meal.

The counter at Sabor is great  representation of Spanish cuisine... it takes you to a lovely summer night in Andalusia 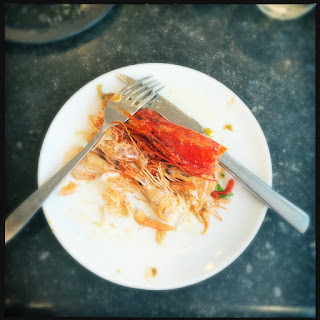