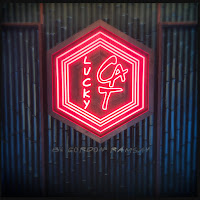 I am not a big fan of Gordon Ramsay.. I just don’t like people who are rude and abnoxious and demeaning especially vis a vis their subordinate. I refused to watch Hell’s Kitchen but did try a couple of his restaurants. So when my friend called me on Sunday evening to go for an early dinner at the Lucky Cat I didn’t say no. My other option was to fall a sleep on my couch watching Mega Food on Netflix while doing my laundry.

I headed over to Mayfair to be surprised that Lucky Cat was in place of the old Maze a restaurant that was suffering from schizophrenia. It didn’t know if it were a steak house or a Japanese restaurant.

At 19:00 on a Sunday evening the place was relatively empty but they opted to put us in the gloomy side of the restaurant next to the kitchens . I don’t mind watching the action when there was an action going on. We asked to be move to the front of the restaurant by the window, and they had gracefully obliged us.
I warned my friend that I am taking pictures before allowing them to touch the plates and that I will be taking notes.. so wasn’t focused 100% on the conversation.

When I go out with Sara ... we usually order half of the menu and this time was no exception. The only difference is we asked the help of our waiters for their best Dishes and he was very helpful. 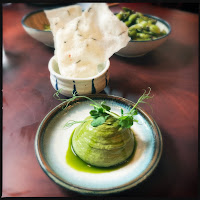 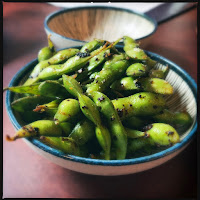 Of course we started off with spicy  edamame. The chilli sauce was mixed with XO sauce which gave it a different in a good way flavor from what we were used to. This was followed with Pea guacamole and rice cracker. The very thin crackers with a hint of seaweed was a nice surprise however for me the pea guacamole was a bit bland. I could neither taste the full freshness of the peas nor the creaminess of the avocado. It was sweet on the border of bland. This was followed by shichimi cucumber which was refreshing after a bit of a disappointing start 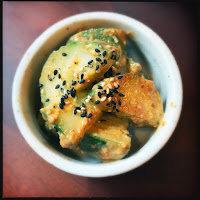 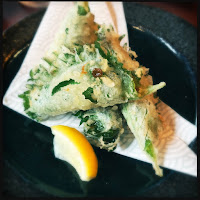 The two following dishes were the best from our order . the Shiso Shrimp tempura which was really good. The shrimps were wrapped in shiso and dipped in a tempura batter before it was fried to perfection. The batter was so light it was almost transparent but gave it a lovely crush that didn’t mask the taste of the shrimps and shiso. It came with a dipping sauce of course. 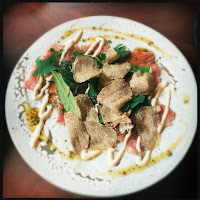 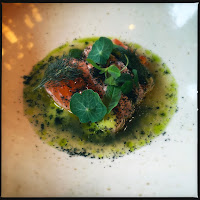 The shrimp was followed by salmon tataki in a white ponzu sauce and salmon roe. The feeling for this dish was that it was fresh and unfettered nothing sophisticated but also on point.
This could not be said for the wagyu tataki that was suffocating under mountains of summer truffle. It’s supposed to be truffle ponzu and roasted garlic but all I can see because you can miss it are shaving of truffle over thickly sliced wagyu that for sure was of great quality but misplaced in this mix of ingredients. The roasted garlic sauce felt more like mayonnaise that I actually told my friend who has an aversion to mayo not to try it .. it wasn’t even mayo! It was a crowded plate for something that should have been ephemeral and fresh. 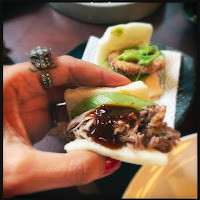 Now I am leaving the worse to last .. can someone explain to me that crispy duck with those wanna be bao buns? I think a designer made the menu not a chef .. the dish looks so appetizing but in this case, looks deceive was a bull’s eye comment . Although The bonito flake crust gives the duck a nice crush, it also gives it a fishy after taste that the hoisin sauce could not mask .

I think there was too much ego in the making of this restaurant. It most probably will cater as a moneyed tourist trap who are attracted to the name rather than the content.