I first heard of the Roti King when Rania my foodie twin sent me the picture of her Roti and Kari... followed by the comment: we don’t need to stand in line around the block in Euston anymore, the Roti King opened Gopal’s Corner at market hall Victoria.
So when I was back to London, and on a Saturday after a bit of a disappointing food exhibition at Victoria & Albert Museum, we all head to Market Hall Victoria for a bit of comfort food.  we were a group of seven or eight people and made it a point to order every dish on the menu ... or there about.
I ordered the banana leaf rice with fried chicken. the rice is served on a banana leaf a tradition found in most of South East Asia  and comes with two vegetables dishes of the day a green bean and a spicy potato and appalam. It was phenomenal.. the chicken full of flavour, crispy on the outside and moist inside , the Sambals and chilli on the side gave the whole dish an umami flavour.

The Roti King Sugen Gopal, open his new venture in Market Hall Victoria and named its an homage to his parent's restaurant that opened in 1970 in Malaysia and served Malay Tamil cuisine. As the name suggests, Malay Tamil cuisine is a fusion of Malaysian cuisine and Tamil food from southeast India. The dishes might look very Tamil but one can not miss the Malaysian influence in spices and flavours.  I think what makes Gopal's corner a great experience, is the fact that all the Kari recipes are handed down from Gopal's mother.

I went back and this time i took my friend and her mother. we ordered two Rotis one with chicken Kari and one with Beef Randang, the fish laksa and the Thosai  with dhal and Sambal. 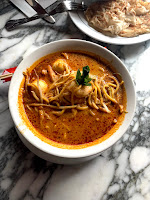 The Roti Canai which is a an Indian influenced flatbread needed, stretched , folded to create layers and cooked on a hot plate is amazing, buttery and flaky (I think this is the best positive use for the word flaky) and absorbs the broth from the Kari, which gives it a great taste. don't be fooled but he simplicity of the bread, even though it is made with simple ingredients like plain flour, sugar, salt, water and butter, mastering the roti making process takes a lot of practice, time and dexterity.. just go look at the baker who is making them. Gopal's Corner makes around 400 rotes a day!! quiet impressive.
The laksa was the last to arrive since the place was packed and the Gopal's corner had the longest queue. Laksa  a Malayan noodle soup with shrimps and fish balls in a coconut based broth  packed with flavour. I love seafood laksa and the fishballs were a nice surprise, I don't think I have every had them before, they were moist, cooked through and infused with flavours. But unfortunately it was not the best Laksa I have had! 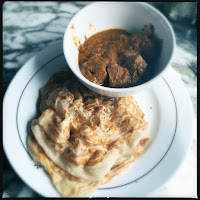 Ok now that the bad news is out of the way let’s focus on the good, amazing , fantastic rest of the meal.


The beef rendang! Can I hear an Amen! Yes! Having this beef rendang feels like a spiritual experience on its own. I just didn’t care; I grabbed my Roti and filled it with a bite of beef soaking in that juice and said a little prayer of gratitude! Rendang is not a curry, although some might consider it so. it is richer in spices  and has a thicker base than curry. I think the reduction of the liquid in the dish, gives it an intense flavour. the spice mix used in this dish like the garam masala used in curry is called pemasak and composed of: ginger, galangal, shallots and garlic. it is slow cooked and this process, tenderises the meat and allows it to absorb the condiments. This gives the dish a complex and unique taste. 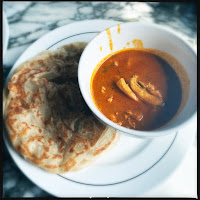 Tasting the chicken Kari after the rendang was a disfavour to the chicken. the kari was really good and the balance of spices to perfection. but the beef rendang just tops everything!

the last dish we ordered was the Thosai or Dosa as it is known in India. it is an asian form of pancake made of a fermented batter of rice and lentils flour. the first time I had dosa was in Kerala in India, but then when I moved to London and was doing my masters, my friend Rand (better known as my daughter) and I discovered this Indian restaurant around the corner from our university that served Dosa with spicy potatoes. for Rand who has a mile long list of food allergy, discovering this place was like unwrapping a gift on Christmas  morning. needless to say, it became our place
to go to. 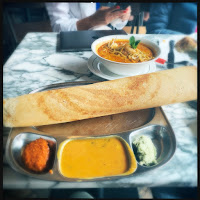 so when I saw it on the menu I had to try it. Gopal's Dosa was a crepe like in thinness, with a crisp side and the other had the little batter bubble that holds the lentil stew , chutney and sambal . Although I mixed up the order and asked for a plain Thosai rather that the masala one that comes with potato, I do not regret it. even as simple as it came, it was a treat!

I know that I am returning to Gopal's Corner soon, I just don't know what to order the Thosai or the beef rendang? I guess I need to make to visits soon!