Eating My Way Around London: Brat 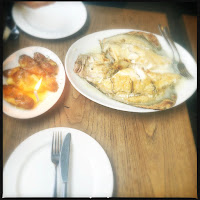 The name BRAT is not significant of a spoiled child but the colloquial name for turbot. The first time i tried this restaurant was on my 40th birthday and this was one of the best meal I have ever had. The simplicity of the meal and the freshness of the ingredients takes everything to a whole new dining level. One can always sense a Basque influence in the menu but the ingredients and cooking equipments are British made. I came back after that a couple of times and I basically tried quite a few items on their menu. This time, armed with my lactase pill, I went  for lunch on my own. I don’t want the distraction to a friendly conversation to dampen my culinary experience.

The last couple of visits, I have tried their season vegetables and of course their famous turbot which was to die for. Cooked on open fire in its own handmade grilling équipement .. the fish comes as smooth as butter and melts in your mouth. Even the leftovers that I had the next day were amazing. And I could similarly rave about the beef rib that was cooked to perfection ie rare for me. 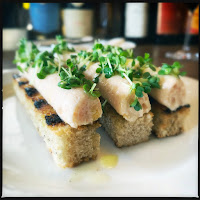 I started my meal with Smoke Cod Roe on open fire toasted bread. The roe is whipped with lemon and butter and piped on the bread stick. The mixture is so buttery and smooth and it is well matched to the crispiness of the bread. that was followed by the lamb that came to the table simultaneously with the bread. 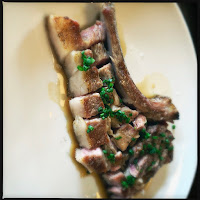 the Lamb Chop came from Cornwall. it was   grilled and floating into its own reduced red wine marinade . There was no manhandling of the the chop, it shows that the integrity of the meat has been respected. It is cooked medium .. pink on the inside with bits of crisped fat from the cut. I am not a big fan of eating animal fat (that is an utter lie.. I love my mom’s Qawarma meat cooked in its fat for hours and hours in order to preserve it) but the creaminess of the fat of the chop just gives the right balance with the red meat. Once the meat was in my  mouth it just melted  .. and I was about to crawl under the counter and cry for more. 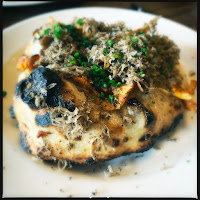 Now one can never go wrong with Bread with Girolle and Summer truffle. the bread is cooked in a wood oven, especially when it comes out charred on the bottom and corners but still fluffy and airy inside. It comes topped with summer truffles and giriole mushrooms . The combination of both with the hot bread is just divine .. I could help but dip it in the lamb jus in order to soak in more flavours 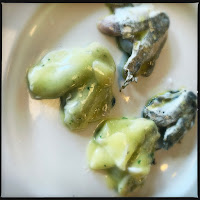 Hake kokotxa which are the throat of the Hake Fish but sourced locally in the UK off the Cornish coast. It is a traditional speciality in the Basque region of Spain. Four pieces are on the plate , two throats (that’s sounds gruesome ) comes simply grilled with olive oil and the other two were cooked in pilpil sauce which is a traditional basque sauce made from garlic infused oil. Usually they cook the fish in oil and with the traces of protein left in the pan they whip up the sauce. I guess this is why i got two grilled with no dressing and two dressed kokotxa . I am pretty sure it is an acquired taste but let’s just say I haven't acquired it yet.. still work in progress 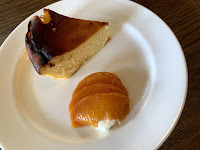 I had to stop myself from finishing the whole bread not because I am cutting down on carbs but because I won’t leave the restaurant without trying their cheesecake.
Since it’s is the summer the cheesecake cane with a side of poached peach that was very juicy and went very well with the baked cheesecake . As everything at Brat the cheesecake too is cooked on open fire and slightly broiled in the top. It comes with no crust ... no one is complaining and the lemon zest in the batter hits you as an after taste.

I think they are going to roll me out of the restaurant .. will figure out the stairs once I get to them.

oh and can I come back tomorrow?