Cooking for Friends: At PSLab 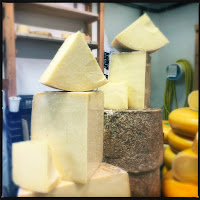 When Rania asks me to become a prop on her studio photo shoot and trails it with you can make use of the kitchen... I just went on a cloud nine! Have you seen the kitchen of PS Lab ? I would bring my bed and squat there just to be close to it.. ok the products designed by PSLab are so beautiful (not an ad) but that kitchen is my dream kitchen. It’s compact but has everything .. and an open space!

After I am done dreaming of the kitchen, my brain started working at 1000rpm trying to think of the menu. I wanted something summery, fresh and reflects the beauty of the ingredients found at Borough Market.

So we met at Monmonth for coffee first and sharing a croissant (we shared because we had our eyes on the oysters stall in the market) then we started our walk . 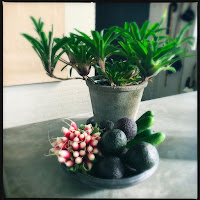 We went to Nial’s Yard Dairy for a selection of British cheese... thank god for lactase pills! We chose a selection of soft and hard cheeses, goat, cow and sheep milk and of course I needed a blue one. Rania grabbed the butter because she had her eye on the French raddishes at Turnip where we got the rest of our vegetables , then  we strolled to Elsey and Bent for the herbs and artichokes.. we got from the little stall next to it three kilo grams of beautiful shiny and glossy British cherries. 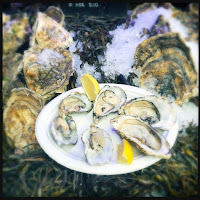 By that time, we had to have a pick me up break, so we head to the oyster shack at Shellseakers and ordered three different oysters each.. all picked off the British coast and with just a squeeze of lemon was the best protein and iron packed breakfast! I picked the salmon for my tartare and we headed to the studio.

We just remembered we needed the bread so we did a u turn and headed for Bread Ahead to grab a baguette (we are a both Lebanese francophones we can’t manage with out the baguette) and sourdough loaf.

The menu was inspired by what I found at the market: the colorful heirloom tomatoes called for a one big salad with red onions and gloc of extra vergin olive oil from Umbria and a squeeze of lemon, seasoned with salt and pepper and freshly picked basil.

The perfectly round globe of Artichokes were big enough not to fit in a single pot.. but had to cook them in three. On the side I did a shallot dipping vinegrette sauce. It is a very Lebanese summer dish that homes and restaurants alike have it on hand during the hot weather.

With the avocados and cucumbers I did a chilled summer soup seasoned with apple cider vinegar . 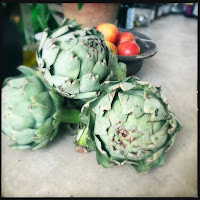 The salmon tartare was dressed in tamari sauce and served in lettuce cups. 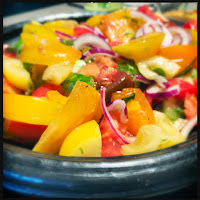 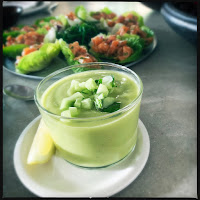 2 English Cucumbers (those long big ones that my dad would chuck in the bin if I brought them home)
6 scallions\4 avocados
2 cloves of garlic (4 if you like more garlic I don't)
1.25litres of vegetable stock (cooled)
4 table spoons apple cider vinegar
black pepper
salt
2 teaspoon of lemon juice
2 teaspoon of parsley.

peel deseed and chop the cucumber, chop the white part and the light green part of the scallions. Halve, peel and pit the avocados.
in a small plate reserve around two table spoons of scallions and cucumber.
then put all the ingredients except the lemon juice and parsley in the blender of food processor and blend . as a hint don't put all the stock with the ingredients, just half of it and add then rest slowly until you get to the consistency you want. mine is smooth and pureed not watery.
in a small bowl, mix the rest of the scallions, parsley, lemon juice and cucumber to use as a garnish. 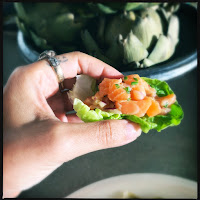 first mix the dressing ingredients in a small bowl and set aside.
then thinly slice the radishes I use a mandolin then put it in ice water to crisp. no one likes a soggy radish!
separate the lettuce leaves and set them on a serving platter, use the ones that you are comfortable to hold in your hand.. no one wants a lettuce sandwich.
in another bowl,  combine the salmon, onion, chives, and enough dressing to coat.
Spoon the salmon tartare into the lettuce cups and drizzle with oil and sprinkle with salt. drain and dry the radishes on a kitchen towel paper and put then on each cup.